The Southeast Area meets on the first Tuesday of the month at the Original Roslin Glen Hotel, 7.30pm.

A good gathering of the seven Rileys as shown plus an MGB and two moderns for refreshments at Dobbies before touring through Dalkeith and Tranent en route to Myreton Motor Museum where we had the chance to reminisce over a fine selection of vehicles and memorabilia. After an enjoyable hour we continued our journey through the golfing area of East Lothian finishing up at the Archerfield Walled Garden Centre for more refreshments. Somewhat chilly in the North Sea haar but it stayed fair and everyone enjoyed the run out. 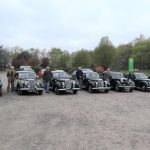 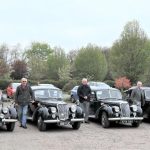 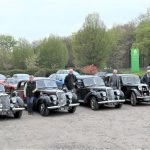 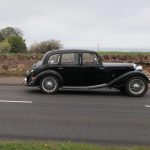 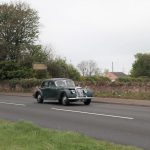 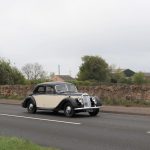 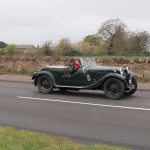 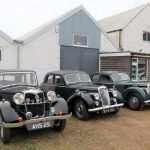 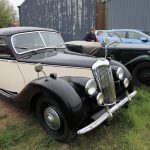 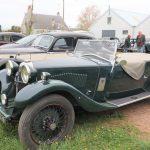 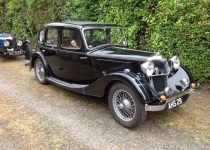 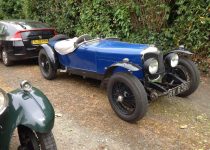 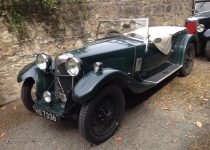 A good turnout of members and an impressive turnout of pre-war Rileys gathered in Bo’ness for the SE area barbeque on Sunday 17th July.

Paul and Rena in their very pretty Lynx having its first real run out for some time, Andrew and Sheila with Gem the dog gradually extending the length of their ventures in the Monaco successfully travelling out from Edinburgh, Donald arriving in his Lynx restored to running order after a blown head gasket as recently as last Tuesday,  travelling in convoy with Roger in his Special. The Riley contingent was completed by Alec and Janet with Tom as a passenger in Alec’s beautiful Adelphi.

No RMs on show with my own fleet currently blocked in by other pending projects, Xtype Jag needing sills and Nissan Navara requiring chassis repairs.

Liz, Karen and Ruth arrived in Liz’s modern with Alan following on via Shank’s pony with baby Euan in the pushchair. Ian and Jane also came in their modern being as they were en route to Elie immediately afterwards. Andrew’s brother Richard was in the very modern electric Tesla? and it was great to welcome home from her recent Australian trip Janet Makin who had the sense to be dropped off by her daughter and could therefore enjoy a refreshing glass of wine along with the other non drivers.

Unlike Janet’s holiday which was blighted by pretty persistent rain, our gathering had almost ideal weather, not too hot nor cold, no breeze to speak of unlike earlier in the week so  everyone was content to sit outside and enjoy the weather. 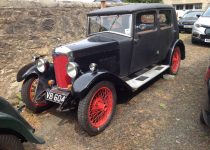 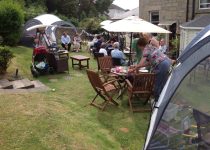 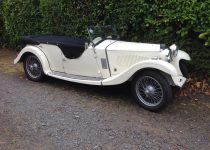 Each arrivee added to the stock of food or drink available for our delight till we had a fully stocked fridge of both alcoholic and non alcoholic refreshments available plus an impressive array of BBQ accompaniments and desserts.

Ruth and Euan soon found their way to the toy box in Ruth’s case and crawling on the grass in Euan’s accompanied by Gem whom Ruth took a great fancy to and took charge of for the afternoon.

After a couple of drinks and a lot of catch up chatter, head chef for the day Natalie “fired up the barbie” and soon had a supply of sizzling burgers , sausages and bacon ready for consumption and to be honest nobody needed asking twice so the chatter took a dive whilst everyone filled their plates and sat down at the various tables set up around the garden.

Quite a few of us managed seconds with no excuse for going hungry, and the heat a good excuse for frequent returns to the drinks area to stay well hydrated from the fridge.

After a bit of a break to let the burgers go down we then tackled the replenished table, this time with a gourmet selection of desserts and confections again supplied by some of the guests.

Despite previous protestations of being filled up with burgers and sausages I don't think anyone passed on the desserts so strawberries and cream , chocolate cake and a variety of biscuits were set upon with relish, finished off with yet more drinks, some even opting for tea or coffee.

There was a notable relaxation after this feast, and I’m sure only being in polite company stopped a few of us from having a little nap in the sunshine.

Andrew and Sheila’s son Keith dropped in late in the afternoon to show off baby George (good name that) his first exposure to an SRE event, and Fiona also dropped in on her journey back from Helensburgh where she had been to visit her mum.

As it moved into early evening, conscious of the journey before them, our guests gradually took their leave. Pre setting off checks requiring re-tightening of wheel nuts on Andrew’s Monaco and Donald’s o/s front with a flat spot - only at the bottom - quickly remedied by a burst of air from the compressor. As Donald said, a check out job for the morning.

Blessed as we were with almost perfect BBQ weather, good food and drink and excellent company, I think everyone enjoyed the day and went home happy.